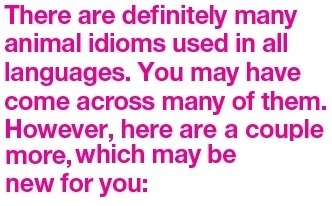 It originated many centuries ago but the expression “to make a pig’s ear out of (something)” is still used. It implies doing or managing something badly.
There is a proverb, however, to consider as the source, i.e, “You can’t make a silk purse1 out of a sow’s2 ear.” It means it is quite impossible to achieve anything in this way.

A fly in the ointment3 is an annoyance4 that spoils an otherwise pleasant situation.

This idiom means to cross or walk in the street or road not at the intersections where you are supposed to and without regard for approaching traffic.
This idiom originated in New York back in the 1900s when New Yorkers would call tourists jays5, and since jays were impressed by all skyscrapers, they would walk in the middle of the street to see the tall buildings better.

The expression “lay an egg” means “to fail especially embarrassingly.” It is used especially when there’s an audience to witness the fiasco, as in sports or the theatre, where it is synonymous with the verbs flop or bomb.
Its uncertain how the phrase came to mean what it does, but there are a couple of theories about its origin.

One is that it comes out of the first World War when “to lay an egg” meant “to drop a bomb”— hence, the figurative “to bomb.”

A mare6 is an adult female horse. Have you ever heard of a horse building a nest? There’s no suchthing. Since the discovery of a mare’s nest would be viewed with some scepticism, mare’s nest came to be used (with some imagination, we must say) to point out that what someone has discovered can’t be true because of its absurdity or ridiculousness7; additionally, it is used to indicate that a supposed discovery is actually an illusion or hoax8.

The idea of “putting the cart9 before the horse” – that is, in reverse order10 – is literally ancient history. The ancient Romans had their own versions of this age-old classic; the Romans spoke of “putting the plow11 before the oxen12.”
The idea appeared in English as early as the 14th century, and within the next two hundred years became the expression we know today, meaning “to do things in the wrong order.”

The idiom “can of worms” refers to a complicated situation in which doing something to correct a problem leads to many more unforeseen difficulties. It is considered synonymous with the mythological “Pandora’s box,” which, in English, signifies a substantial source of troubles.

Someone who is said to be “a bull in a china shop” is a person who breaks things or who often makes mistakes or causes damage in situations that require careful thinking or behavior. Although the designation can imply reckless destruction on the part of the said “bull,” it often implies clumsiness13.