I have noticed that domestic animals appear frequently in idiomatic Czech and Slovak, often in quite a basic and rude way – for example, your words for ‘hen,’ ‘duck,’ ‘pig,’ and ‘cow.’ We use ‘pig’ similarly, meaning someone who is mannerless or greedy1 (or maybe both), and no woman would like to be called a cow, but in some parts of the UK ‘hen’ and ‘duck’ are affectionate2 terms used to address women. But we have nothing like your kočka used for women, or ‘ox,’ whether used to refer to a stupid man or, with some Czech guys I know, a kind of universal punctuation. You also have beautiful expressions such as My jsme spolu husy nepásli or the Slovak potí sa ako somár v kufri and its Czech equivalent zpocený jak vrata od chlíva.

In English we also have plenty of animal expressions. For us an ox symbolises patient strength, thus as strong as an ox, while someone who’s like a bull in a china shop is very clumsy3; until the cows come home means ‘for a very long time,’ as in “I could sit here until the cows come home.” I could eat a horse means being very hungry; hold your horses means “Wait!” Don’t look a gift horse in the mouth means that if you get something for free you shouldn’t criticise it, and flogging4 a dead horse is to waste your time on something useless.

As fat as a pig means what it says; pig-headed means ‘stubborn5’. If you live high on the hog you live very well; when pigs fly means something is surely never going to happen, while lipstick on a pig describes an attempt to improve something that has no chance of success. Sheepish means ‘embarrassed’, a wolf in sheep’s clothing is a bad person pretending to be good, mutton dressed as lamb refers to a woman who wears clothes that would be more suitable for someone younger, and the black sheep of the family is the one nobody else likes. 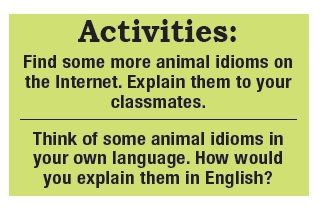 We have poultry6 idioms too. A goose is a silly child. Let’s talk turkey means “Let’s talk seriously.” If you run round like a headless chicken you waste energy on unproductive activity. Don’t count your chickens before they are hatched7 means you shouldn’t depend on something that hasn’t happened yet. Similarly, don’t put all your eggs in one basket means you shouldn’t concentrate on just one thing and forget about everything else.

Moving indoors, to be in the doghouse means to be in trouble. Let sleeping dogs lie advises the listener not to change things that don’t need changing. Someone who is like a dog with a bone only thinks about one topic, and a dog’s dinner is a real mess (rather like your ‘bordel’). To let the cat out of the bag is to give away a secret; the cat’s pyjamas denotes something cool or excellent; something that is like herding cats is impossible to organise.

Finally, acting the goat, like horsing around, means behaving stupidly. Kids, now mostly used to describe children, originally meant baby goats. And don’t be surprised if you find learning things gets harder as you get older: You can’t teach an old dog new tricks.