Although some people don’t feel happy about it, Valentine’s Day has found its way into our culture as well. This is especially due to effective marketing strategies, which are one of the reasons why many people don’t want to have anything to do with the holiday. No wonder. If you are not into romantic stuff, you might feel a little bit sick about all the hearts and flowers and pink trifles1 displayed in the media and shops… Poor Saint Valentinus!

THE STORY BEHIND THE HOLIDAY
The fourteenth of February is supposed to remind people of a person named Valentinus of Rome, who supported Christians despite their persecution2. He was imprisoned3 and sentenced to death. According to some legends, he managed to do some miraculous healing4 before his execution5. He was buried on February 14. Some legends add that Valentine used to secretly perform weddings for Roman soldiers who couldn’t marry officially (the emperor thought married soldiers were no good). That’s why his character is associated with love.

THE STORY THAT FOLLOWS
Now, there is a huge difference between honouring brave Valentine and showing your partner how much you care by showering6 him or her with flowers and gifts. By the way, did you know that the average American spends more than $130 on Valentine’s Day? However, there are those who argue that you may celebrate a loving relationship even without the commercial humbug and not necessarily on February 14. Getting cool presents or eating out in a posh7 restaurant doesn’t mean anything after all. How about a hug, a kiss or a single rose? The tradition of sending Valentine cards hasn’t died out either. The most important thing is to show you care. What is more, you have the opportunity to do it your own way, no matter what the commercial world around makes you believe is cool!

DID YOU KNOW THAT:
♥ 73% of Valentine’s Day flowers are bought by men?
♥ 15% of U.S. women send flowers to themselves?
♥ 3% of pet owners buy presents for their pets?
♥ the number of Valentine cards sent each year worldwide is outnumbered only by Christmas cards?
♥ the oldest known Valentine card was sent by the Duke of Orleans to his wife in France while he was imprisoned in the Tower of London in 1415?

SYMBOLS OF VALENTINE’S DAY:
♥ The heart as the source of our emotions.
♥ The red rose as a favourite flower of Venus, the Roman goddess of love.
♥ Chocolate as the symbol of love that is precious and sweet.
♥ Cupid as the son of Venus, the god of desire and attraction. 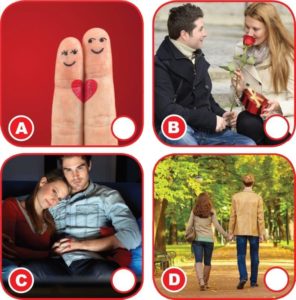 Look at the pictures (A) – (D).
Number them 1-4 according to your own preference related to celebrating Valentine’s Day. Compare your ides with your friend.