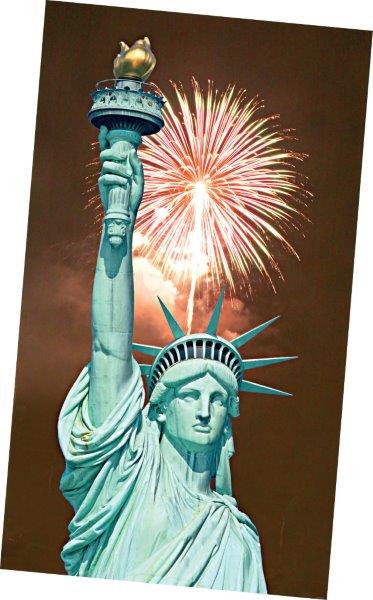 -The Declaration of Independence actually began on July 2, 1776. Having started with a letter to Britain’s King George to explain why the Continental
Congress voted to declare America’s independence, the final wording2 of the declaration was finally agreed on July 4, 1776.
-In total, the document was signed by 56 men from 13 colonies. Interestingly, it was only John Hancock who signed the Declaration of Independence on July 4, 1776. All the others signed later.
-The lead author of the Declaration was Thomas Jefferson, who later served as the 3rd President of the USA from 1801 to 1809. Coincidentally3, he died on July 4, 1826. Jefferson was 33 years old at the time of signing the Declaration; the average age of the signers was 45. The youngest was Thomas Lynch, Jr. (27 years old) of South Carolina. The oldest delegate was Benjamin Franklin (70 years old) of Pennsylvania.
-The first Independence Day celebration took place in Philadelphia on July 8, 1776. This was also the day that the Declaration of Independence was officially read in public for the first time. However, the White House held its first Independence Day party much later – in 1801.
-Nowadays, Americans simply love eating on July 4. Approximately 150 million hot dogs and 700 million pounds of chicken are consumed on this day alone. Moreover, they enjoy huge parties with fireworks, parades, barbeques, and other festivities like picnics and concerts. In order to celebrate Independence Day in 2012, the U.S. imported almost $228 million worth of fireworks from China.

Questions & Activities
-Is there any distinctively4 Slovak/Czech holiday comparable to Independence Day in terms of partying? Which one? Do you like it? Why (not)?
-Is there any dangerous holiday in Slovakia/the Czech Republic? Why (not)?
-What is your favourite holiday? Explain why it is.
-Which holidays do you celebrate with your family? Do you observe any special traditions (e.g. eating certain kinds of food, decorating the house, etc.)?