Many people may be unaware1 of the fact that an international students’ day even exists. And of those who do, they may not know how important this day is in Czechoslovak history and how it connects Prague and London.

In one of the protests against the Nazi occupation in Prague on 28th October 1939, a medical student, Jan Opletal, was shot by police near the National Museum. He was taken to hospital but unfortunately died shortly afterwards on November 11th. His funeral was attended by thousands of his fellow students who turned the funeral into another huge protest against the Nazi regime. As a result, on November 17th 1939, the student dormitory, where Opletal had lived was raided2. Some 1200 students were detained3 during the operation and sent to concentration camps; 9 more were executed. One of the professors who helped with Opletal’s funeral, Josef Matoušek, was arrested by the Gestapo on November 17th and executed without trial4. On that same day, universities in Bohemia and Moravia were closed down.
This is where the London connection comes in. As a result of these events in 1941, November 17th was declared International Students’ Day by the International Students’ Council in London. This led to the founding of the International Union of Students, which was established in Prague on August 27th 1946, a fact also rarely known amongst people worldwide.
Fifty years later, on November 17th 1989, Jan Opletal’s death was commemorated in Prague at a cemetery, and the violence that developed on that evening in the city centre became the focus and the trigger5 for the Czechoslovak “Velvet Revolution”.
During the strike, university classrooms became more animated than they had ever been before. They were used to draw and paint posters, produce a student newspaper and hold meetings about the strike.
Suddenly roles were reversed, and it was the students who were taking the lead and the teachers who were taking the back seat. Good teachers will always learn from students. 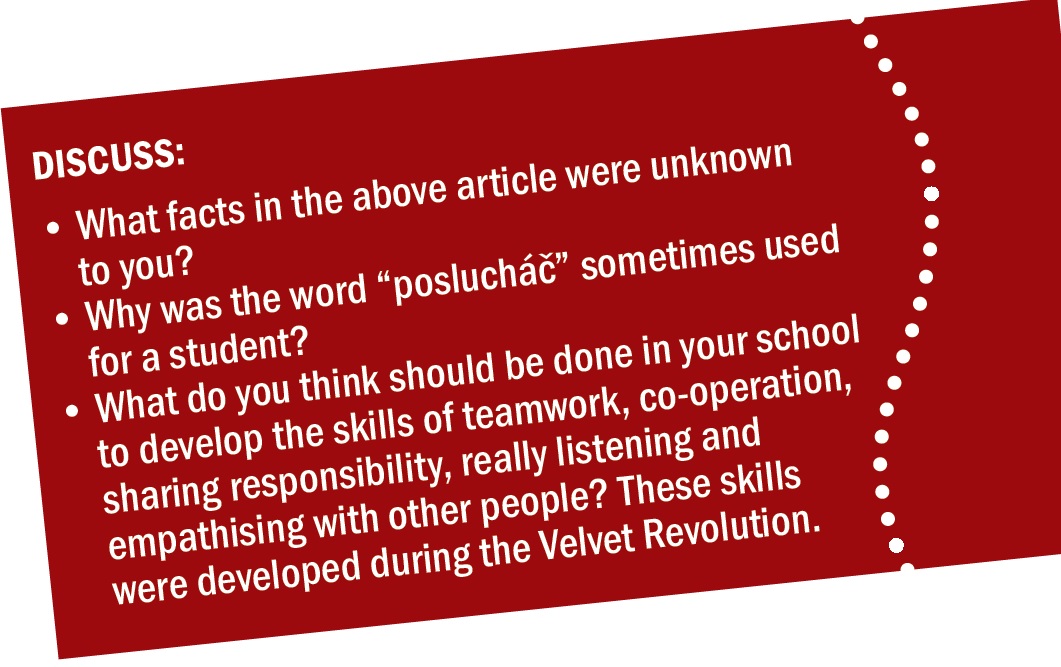 One of my students wrote in 1989: “I think I have learned to listen to people, considertheir opinions and mainly tolerate other opinions. And generally we have learned how to discuss, think while speaking and hearing, and not to be scared of voicing our own opinions. I am proud of being a student now”