It’s been 54 years since the tragic loss of one of the most remarkable1 figures in American history. You might have heard the name all right, but how much do you actually know about the man?
Probably this:
– His name is confusingly similar to the name of the German protestant reformer.
– He was African-American.
– He fought against racism.
– He was killed.

However, there is much more to the story. Here are some useful facts to remember:
Martin Luther King Jr. was born on January 15, 1929 into a strongly religious family.
His birth name was Michael King. However, when he was 5 his parents changed his name to honour the German reformer Martin Luther.
He was born in Atlanta, Georgia, one of the southern states where racism and segregation had a very strong position in public life. Being forbidden2 to have white friends and to use the same public facilities3 as the white population made young King very angry. 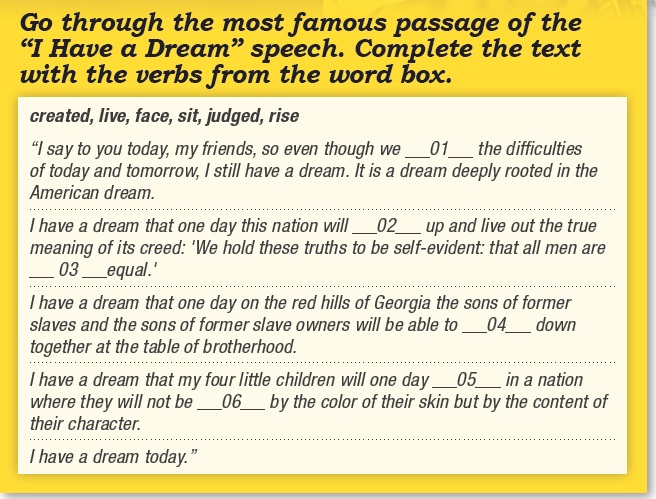 He attended a respected black high school where he first showed his qualities as a talented student and a speaker.
He believed in nonviolent resistance4 and civil disobedience5 in the fight for civil rights.
Martin Luther King, together with other activists, founded the organization of the Southern Christian Leadership Conference in 1957 to support nonviolent protests and boycotts.
The brutal reaction of the police forces against the protesters finally caught the public attention and helped to change the laws of the Unites States. The Civil Rights Act of 1964 and Voting Rights Act of 1965 were a huge success.
Martin Luther King Jr. is well known for his historic speech called “I Have a Dream,” which he delivered in Washington DC in 1963, in front of an audience of more than 250,000 people.
He was shot dead on the balcony of a motel in Memphis, Tennessee on April 4, 1968 by James Earl Ray who was arrested and sentenced to life imprisonment. He died in prison 29 years later.
During his life, Martin Luther King Jr. won the Nobel Peace Prize. After his death, his birthday was established as a U.S. federal holiday.