And shortly after I moved from Banská Bystrica to Olomouc, I wanted a doughnut for my breakfast, so I went into a baker’s. I used the word I knew from Slovak, ‘šiška.’ The assistant said, “Cože?” I said it again. Then she shouted at me. It was normal in those days for people in shops to shout at customers they didn’t understand. I said ‘šiška’ again. Then she asked me to show her. “Aha,” she said, rolling her eyes. “Kobliha.”
Misunderstandings like this can make good stories, but sometimes they are just plain embarrassing1. Customers don’t like to be shouted at and treated like idiots. Banks don’t like to lose business. It’s not always nice to be a comic foreigner. So let’s look at a few more false friends between English and Czech and Slovak.
Sportspeople do NOT wear a ‘dress’ (which is a garment for women – šaty), but a ‘shirt’ or ‘strip’. And what you call hokej is, confusingly, also ‘hockey’ in North America, but ‘ice hockey’ in Britain. Our ‘hockey’ is played on grass; I once heard about a women’s ice hockey team from Slovakia who travelled to London to play in a hockey tournament and only realised their mistake when they arrived. And sports fans sit in a ‘stand,’ not a ‘tribune.’
Continuing with fans, your fén is our ‘hairdryer’; our ‘fan’ is a device for keeping the house cool on hot days.‘Semaphore’ is a way of signalling with flags, not a device for traffic control – that’s ‘traffic lights.’ Music is played through ‘speakers’; when I heard the word reproduktor I was surprised, as in English ‘reproduction’ means making babies. Speaking of which, I recently learned that the Czech word pregnantní doesn’t mean ‘pregnant’ (tĕhotná) at all, but ‘concise2.’ Also, for us an ‘ambulance’ has wheels; it’s the vehicle that takes you to hospital, not part of a hospital, and in hospital a ‘visit’ isn’t from the doctor (‘doctor’s rounds’) but people coming to see their friends and relatives who are ill.
There are several false friends that we wear. Manchester is a city for us, not a kind of cloth; that’s called ‘corduroy’ or ‘cord’. A ‘rifle’ is a gun rather than a pair of jeans. A ‘cylinder3’ is a shape in English (a can of Kofola is cylindrical, for example); your cylinder/cylindr is a ‘top hat.’ You might wear it with a ‘tuxedo’ or ‘dinner jacket’ (NOT a smoking – smoking involves tobacco) and probably also a ‘bow tie’, which Slovak calls a motylík, literally ‘a little butterfly.’ And a ‘cravat’ is a kind of neckscarf; we call your kravata a ‘tie’ or, in 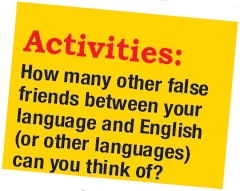 America, ‘necktie.’ The word ‘cravat’ actually comes from French via the German pronunciation of ‘Croat’!

Finally, let’s think about the word kanál. Depending on the situation, it could be a ‘canal’ (a man-made structure, e.g. the Panama Canal), a ‘channel’ (TV channel), a ‘drain’ (where waste water goes), a ‘sewer’ (for, er, other waste material), or several other things too: ‘gutter,’ ‘ditch,’ ‘gullet,’ ‘conduit’… Who said English was easy?