Grand Central Terminal in New York City was built in 1913. It is the largest train station in the world, and has plenty of secrets. The terminal first opened to the public at midnight on February 1, 1913, and its first train left at 12:20 AM. Grand Central is really a special landmark.

New York’s most famous clock
Many native New Yorkers have heard the famous phrase “meet me under the clock.” In New York this phrase now refers to the Grand Central Clock, which adorns1 the top 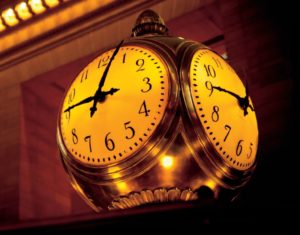 of Grand Central Terminal’s information booth2, which is located in the main concourse area3. This magnifi cent structure has starred in several movies throughout Hollywood history. Grand Central Station is home to countless secret passageways, underground private tracks and secret staircases; one of these secret staircases is located directly below the circular information booth where this intriguing4 clock is situated. The staircase is a spiral-style structure hidden by a secret door, and it leads directly to the information area on the lower level. Grand Central Terminal Clock is valued between 10 and 20 million dollars.

The Whispering Gallery
Once you are at Grand Central, make sure you meet someone by the landmark’s clock and, in the vibrant rush5, walk quietly through the “whispering gallery.” It is located on the Grand Central Terminal dining concourse6 near the famous Oyster Bar & Restaurant. The acoustics of the low ceramic arches7 can cause a whisper to sound like a shout. Sound impossible? To test it out, you and a friend will have to stand in opposite corners of the large arched entryway. Face the corner and whisper. Experience the magic. The Whispering Gallery is a popular spot for marriage proposals8.

The Secret Passages under Grand Central Terminal
Underneath Grand Central Terminal, there are secret networks of underground tracks, steam-pipe tunnels, and storage areas. Hidden in these underground depths is a train platform with a secret entrance and an elevator straight up to the Waldorf- Astoria hotel. President Franklin D. Roosevelt reportedly used this as his private entry into New York City – a way to get from his train to the hotel without being bothered by reporters. Unfortunately, you can’t currently see this secret passage for yourself. The door to the secret elevator is welded shut9.

The Grand Central Kissing Room
The Biltmore Room, located on the Grand Concourse across from Starbucks, was known as the “Kissing Room” during the golden age of train travel during the 1930s and 1940s. The Biltmore Room was where the famous 20th Century Limited train from the West Coast used to arrive. Passengers – including many celebrities and politicians – would get off the train and greet their loved ones here with kisses and hugs. Some of them would then go up the stairs into the famous Biltmore Hotel, which is now the Bank of America building.

Oh, My Stars!
The ceiling10 over the Main Concourse, with its famous mural11 of the stars, is one of Grand Central Terminal’s most famous features. However, eagle-eyed visitors12 will notice that the zodiac13 on the ceiling is depicted backwards. The artist, Paul Helleu, was inspired by a medieval manuscript that showed the heavens as they would have been seen from outside the celestial sphere.