January and February are big months in the US for national birthdays. First we have Martin Luther King, Jr.’s Birthday (his birthday is January 15th, but the holiday is the third Monday of the month, and then Presidents’ Day (February 15th in 2021).

Presidents’ Day is technically George Washington’s birthday, and the national holiday is on the third Monday of February. Why isn’t it just on February 22nd every year, which is the actual date of Washington’s birthday? Because Abraham Lincoln’s birthday is February 12th! Lincoln is also considered one of the greatest US presidents. In 2009, shortly after Barack Obama became president, a photo was taken of all the living former US presidents together at the White House (see photo). There are five living US presidents today.
What do people do on Presidents’ Day? Well, all schools, banks, post offices, and many national companies or organizations are closed. In the weeks or days leading up to the holiday, schools often organize events and lessons for students about the presidents of the United States, particularly George Washington. Many businesses are open as usual, and many stores hold sales on Washington’s Birthday. About 35 percent of American employers give their workers the holiday off.
In 1983, President Ronald Reagan signed Presidents’ Day into law, and it was first celebrated three years later, in 1986. All of these birthdays with George Washington, Abraham Lincoln, and Martin Luther King were so close together! So the government put the presidents’ birthdays together as one holiday, Presidents’ Day, and observed Martin Luther King’s birthday separately, since he was not a president but had done many fantastic things for this country. Martin Luther King, Jr. Day is observed on the third Monday of January each year. Sometimes it is difficult to understand that even not long ago, some US states had difficulty observing the holiday! Some states used a different name for the holiday, not wanting to call it “Martin Luther King, Jr. Day.” Some states combined the day with other holidays. But finally, all 50 US states observed it for the first time in the year 2000. 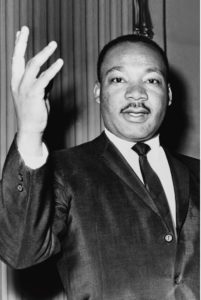 Dr. Martin Luther King, Jr. (also simply known as MLK) was an American Baptist minister1. He became a civil rights leader in the early 1950s. Civil rights are the rights and privileges that every human being should have. There was a strange situation that heavily influenced civil rights in the US in 1955. In the early 1950s, African Americans had to ride in the back of public buses. The front part was reserved for only white people. Rosa Parks, a black woman in her 40s in Alabama, sat in the black section of the bus, as usual. The bus driver commanded her to move because the “white section” was all full and a white person wanted to sit down somewhere, but she refused. This made national news, and she later worked with Martin Luther King. Dr. King gave many speeches and wrote articles in newspapers and magazines. In 1964, King received the Nobel Peace Prize for fighting inequality without violence. There was a fictional film just last year about the silent protest march2 that King and thousands of his black and white followers made from Selma, Alabama to Montgomery, Alabama. This march was only about 25 miles, but many groups tried to stop them. King’s group was marching to protest the treatment blacks received when they tried to vote in certain states. Every time they tried to vote in an election, they were turned away3.
In April 1968, King and his group went to Memphis, Tennessee, to support workers who were on strike. He spoke at a few rallies4 while he was there. On April 4th, King went out onto the balcony of his hotel room. He was assassinated5 by one gun shot while he stood on the balcony.

QUESTIONS
1. What is ‘assassinate?’
2. Name at least three famous US birthdays celebrated in January and February.
3. Is there a famous civil rights activist in your country?
4. Why is there only one day now honouring presidents? Presidents’ Day & Martin Luther King, Jr. Day