The Woman Who Shaped the World

“I would like to be remembered as a person who wanted to be free… so other people would also be free.”

ROSA PARKS, CIVIL RIGHTS ACTIVIST, WHOSE LONELY ACT OF DEFIANCE1 BEGAN A MOVEMENT THAT ENDED LEGAL SEGREGATION IN AMERICA
Under the Jim Crow laws, the segregation of black and white people became a part of daily life in the U.S. South in all aspects; schools, public transport, restaurants, toilets – everything had to be divided into separate sections for blacks and whites. The typical yellow school buses were available for white pupils only. A little African-American girl, who had to walk to school every day while a half-empty bus with white children passed by, soon realized that there was “a black world and a white world”. On December 1, 1955, the grown-up Rosa Parks decided that she did not want to be treated like a “second-class citizen” anymore and refused to give up her bus seat to a white passenger.
Immediately arrested by the police, she aroused a small spark2, which with the help of other dissatisfi ed African-Americans soon caught fire. The Montgomery Bus Boycott followed. That day when Rosa Parks made a small brave gesture was later marked as the beginning of the modern civil rights movement in the U.S. Rosa Parks inspired the idea of freedom. She believed that “each person must live their life as a model for others” and acted according to it.
Rosa Parks was born Rosa Louise McCauley on February 4, 1913, in Alabama.
“Back then we didn‘t have any civil rights. It was just a matter of survival, of existing from one day to the next. I remember going to sleep as a girl hearing the Ku Klux Klan ride at night and hearing a lynching and being afraid the house would burn down.” When she was 19, Rosa married Raymond Parks, a barber and an active member of the National Association for the Advancement of Colored People (NAACP). The couple joined the local branch of the NAACP, where Rosa served as secretary and later youth leader. They worked together on many cases of murder, rape3 or abuse4 and tried to improve the situation of African-Americans. 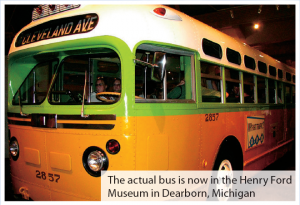 In Montgomery, the first four rows of bus seats were reserved for white people, but if this section was full, the driver could place a movable sign anywhere in the bus, so that the whites could sit and black people had to move to the rear5 seats, stand or leave the bus. Aft er a winter day at work at a department store, 42-year-old Mrs. Parks boarded the bus and sat in the first row of “colored” section seats. On the third stop, the bus filled up with white passengers, so the bus driver moved the section sign behind Rosa Parks and demanded that she and three other African-Americans move to the back. The others did, but she refused. “People always say that I didn’t give up my seat because I was tired, but that isn’t true. I was not tired physically, or no more tired than I usually was at the end of a working day. No, the only tired I was, was tired of giving in6.”
Rosa Parks was taken to jail7, but the president of the NAACP, Edgar Nixon, bailed8 her out the next day. Mrs. Parks was not the first woman who had refused to give up her seat to a white passenger – there were three other similar cases of civil disobedience9 previously. But unlike the others, Mrs. Parks’ action started the Montgomery Bus Boycott, which lasted for 381 days. Dozens of public buses stood idle10 for months, which severely damaged the company’s finances, until the law requiring segregation on public buses was lift ed. Th ere was huge opposition: black churches were burned, Martin Luther King’s home was bombed in 1956. However, the black community’s bus boycott marked one of the largest and most successful mass movements against racial segregation.

Later Years
Rosa Parks became an icon of the civil rights movement. The 1970s were marked by loss for Mrs. Parks: the three deaths of her closest family members – her husband, younger brother and mother, within three years, which caused her a lot of suff ering. In 1980, Rosa Parks rededicated herself to founding and fund raising. She co-founded the Rosa and Raymond Parks Institute for Self Development, which still runs the Pathways to Freedom bus tours, which introduce young people to the history of the civil rights movement. She was awarded many honors and medals, including the Presidential Medal of Freedom and the Congressional Gold Medal. She published her autobiography Rosa Parks: My Story and her memoirs titled Quiet Strength, which focus on the role of faith in her life. Mrs. Parks died in 2005 at the age of 92.

Time to think
■ Have you ever been discriminated against because of your race/sex/ religion/level of education, etc.?
■ Do you have any prejudices11?
■ Would you let your child marry a person with a diff erent skin color or with a diff erent religion?
■ Rosa Parks is an ideal example of the quote: ˝It is better to stand alone than to fall with many.” Why? Do you know any other person (famous or ordinary) this quote could also apply to? Who? Explain.
■ Imagine that you have recently moved to a different city. You are a little shy; therefore you are glad you have found a new group of friends. But recently you have realized that your friends often make racist remarks and provoke and discriminate against others. You do not like it. What would you do/say?