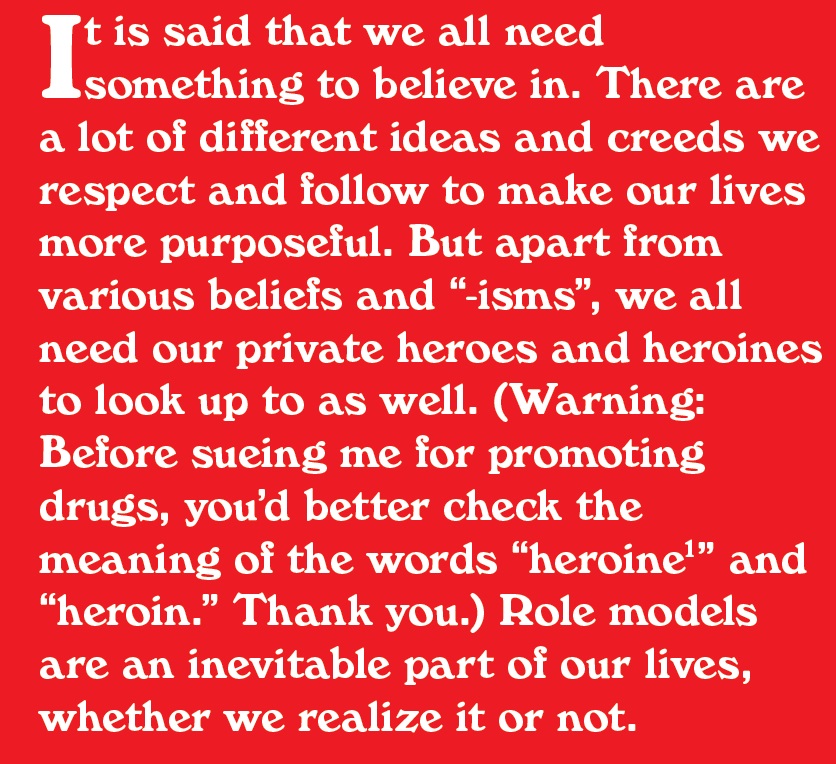 There is one good reason for admiring other human beings. “Nobody is perfect,” as the old saying goes. The more we realize our own weak points, the more we praise2 those who possess the qualities we lack.
The very first role models of every human being are their parents. Not only are they physically stronger and cleverer than their off springs3 but they keep them safe and meet their emotional needs as well. No wonder that in the eyes of little ones, mummy and daddy are almost omnipotent4 superheroes! Psychologically, it is desirable for a kid to have both maternal and paternal examples as they become two different sources of inspiration. Moreover, around the age of five, a boy shifts his preferences from the mother to the father, which is a vital step in forming his identity.
However, as we grow up, we get to know more and more people and tend to choose our idols from outside our homes. This need is even stronger when we find out that our parents aren’t perfect after all. The more disappointed we get, the more distant the role models we pick. That is probably why sportsmen, pop stars and celebs of all kinds are so widely admired among teenagers. We don’t know our heroes in person – many a time there is even no chance of meeting them at all – and so the risk of getting 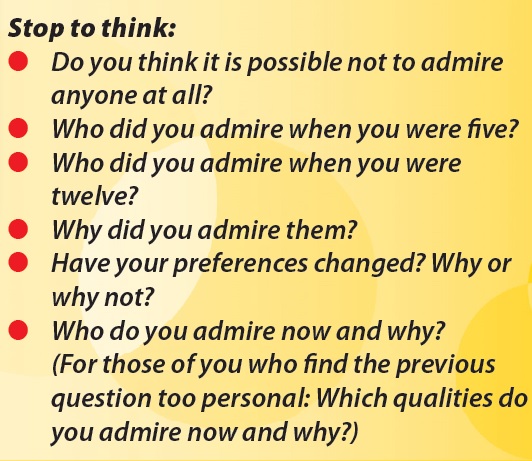 disappointed is lower. We admire their achievements, fame, appearance and fortune and dream of being like them.
Some of us even look up to imaginary heroes: book or film characters, and identify ourselves with them in the wonderful world of our imagination where everything is possible and we may become whoever we want and may change into anyone we like. Now if you think that dull grown-ups don’t have their role models since they seem to know best, you are wrong. Although young wizards5 and muscular Hollywood actors don’t drive them crazy any more, they certainly have real world characters they respect and follow. They are mature enough to be aware of their role models’ faults on the one hand and still appreciate their outstanding qualities on the other.  Respect doesn’t require mad adoration6 – at least I haven’t heard of anyone putting up a poster of their boss above their bed just because of his remarkable ability to work hard! 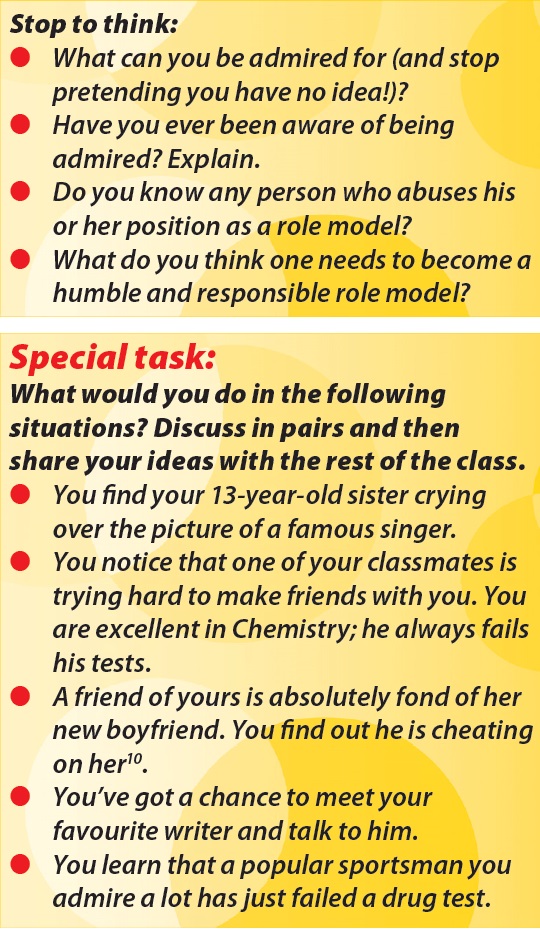 I’m sure we are all familiar with admiration. But how about being admired? Now I can almost see your puzzled faces. But although you haven’t noticed, YOU might be admired as well!
Being aware of your own qualities is not wrong. A good amount of self-confidence works miracles in one’s personal and professional life. However, the awareness of being admired for your strong points is a tricky matter and must be handled with the most special care. For even though you may feel flattered7, it gives you a certain degree of power that can easily be used against your admirer.
What is more, the awareness of being a role model may turn you into an unlikeable and stuck up person, who overestimates8 his/her own self-importance.
Only a strong and mature personality is able to perform as a role model with humility9 and responsibility.
As it was written above, being aware of our own potential is not wrong. The question is what we do with it.