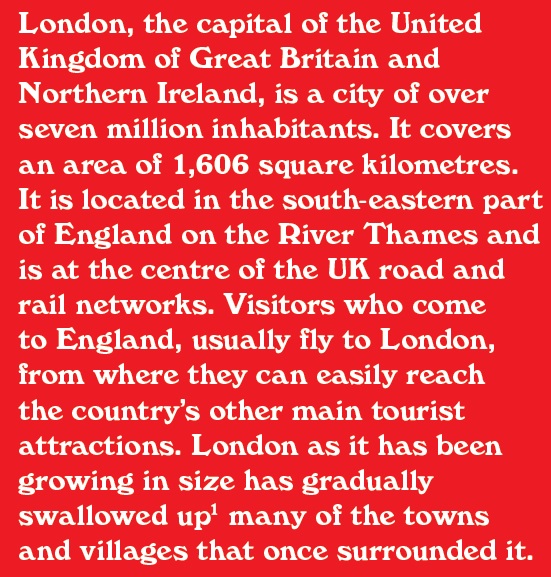 In 55 BC, Julius Caesar’s Roman army invaded England. They landed in Kent and marched north-west until they came to the broad River Thames. There were a few tribesmen2 living on the opposite bank, but there was no major settlement. However, by the time of the second Roman invasion 88 years later, a small port and mercantile3 community had been established there. The Romans bridged the river (the fi rst bridge was built in AD 43) and built their administrative headquarters on the north bank. In Roman times it was already called Londinium, which was a version of its old Celtic name. When the Romans invaded Britain, they already controlled vast areas of the Mediterranean, but fi erce4 opposition from local tribes (such as Queen Boadicea’s Iceni) made Britain diffi cult to control. The Romans persevered5 however and consolidated6 their power by the end of the century. The tombstone7 of a Roman legionnaire was built into London’s City Wall in 200. Londinium, with its port, developed into a capital city; by the end of the third century, there were some 50,000 people living there. About 200 metres from London Bridge was the forum (the chief market and meeting place) and the basilica, which comprised8 the town hall and court of justice. But, as the Roman Empire crumbled9 in the 5th century, the Roman army began pulling out in 410.

Most traces10 of the Roman occupation are in the City, the Museum of London and the British Museum, which have extensive collections of Roman fi nds. A Roman pavement is in the crypt of All Hallows by the Tower, and an amphitheatre was recently found below the Guildhall. The foundations of the Temple of Mithras are on view near the site on Queen Victoria St. A section of the Roman wall can be seen from the Museum of London.

When the Romans left Londinium, it was the largest city in England. The historic division between London’s centres of commerce (the City) and

government (Westminster) started in the mid-11th century, when Edward the Confessor11 established his court and sited his abbey (Westminster Abbey) at Westminster. Meanwhile, in the City, tradesmen set up their own institutions and guilds12, and London appointed its fi rst mayor13. Houses and shops were built; shopkeepers had their shops usually in the downstairs of their premises14 and lived above their shops. The fi rst stone bridge was built in 1209 and lasted 600 years. It was the only bridge across the Thames in London until Westminster Bridge was completed in 1750. The Tower of London was started in 1078 and became one of the few centres of royal power in the largely selfgoverning City.
When speaking about Medieval London, we should not forget to mention the Norman Conquest15, the coronation of William I in Westminster Abbey, and the publishing of the Domesday Book. The Domesday Book is a great land survey, commissioned16 by William the Conqueror to assess17 the extent of the land and resources owned in England at the time and the extent of the taxes he could raise. The information collected was recorded by hand in two huge books, in the space of around a year. William died before it was fully completed.
Another signifi cant document issued in the time of Medieval London was King John’s Magna Carta, which gave the City as well as all the British people more powers. We know that England is one of the oldest parliamentary monarchies; the fi rst session of parliament was held at Westminster as early as 1240.
As various infectious diseases often occurred, the population of London did not rise above its Roman peak of 50,000. The Black Death (peaking in 1348 – 1350) reduced the population by half.

The Great Fire of 1666 destroyed much of London. In September 1666 almost all the buildings were destroyed. The Tower, Westminster Hall, Westminster Abbey, all from 11th century as well as a few churches are the only survivors of the Great Fire. The Museum of London has some artefacts from this era, while the National Gallery has some paintings dating back to those times. Manuscripts, including the Domesday Book, are found at the British Library.

In the 16th century the monarchy was stronger than ever before. The Tudors established peace throughout England, allowing art and commerce to fl ourish. The Renaissance reached its peak18 under Elizabeth I, the daughter of Henry VIII, who is especially famous for his six wives and his break with the Roman Catholic Church. Henry VIII’s Reformation had other reasons than reformation in Europe. Henry VIII wanted to divorce his fi rst wife, Catherine of Aragon. The divorce was against the principles of the Catholic Church and against the interest of Spain. So Henry decided to leave the Roman Catholic Church. By establishing the Church of England, he became the Head of the Church, the owner of all its property and achieved the divorce. In 1536, Henry VIII’s second wife, Anne Boleyn, was executed19.In 1547, Henry died and was succeeded by his son Edward VI. Six years later, in 1553. Edward died, and his sister became Queen Mary I. Six years later, in 1558, Mary I’s death made Elizabeth Queen. In the era of Elizabeth I explorers20 opened up the New world, Francis Drake made his fi rst voyage to the West Indies in 1570, and in 1584, Walter Raleigh made his fi rst attempt to colonize America. The year 1588 was a signifi cant year for England, when Francis Drake succeeded in defeating the Spanish Armada.
The Elizabethan era is the time when English theatre fl ourished. In 1591, the fi rst play by William Shakespeare was produced.
Shakespeare dominated the theatrical scene till his death in 1616. Shakespeare’s theatre, the Globe, became the centre of culture, and theatre became an important part of people’s lives.

Unfortunately, the Great Fire of 1666 wiped out most of the City. Fortunately, Middle Temple Hall, Staple Inn and the Lady Chapel inside Westminster Abbey were beyond its reach. The museums have fi ne furniture and artefacts. Further afi eld are Hampton Court and Sutton House.