Thomas Jefferson was the 3rd president of the United States. He was the author of the Declaration of Independence, first Secretary of State for the USA, and a Founding Father. Jefferson was a lawyer, politician, inventor, writer, and architect. As a president, he bought a lot of land from France, had some parts of the West explored, and sent the navy to fight with pirates near the African coast. 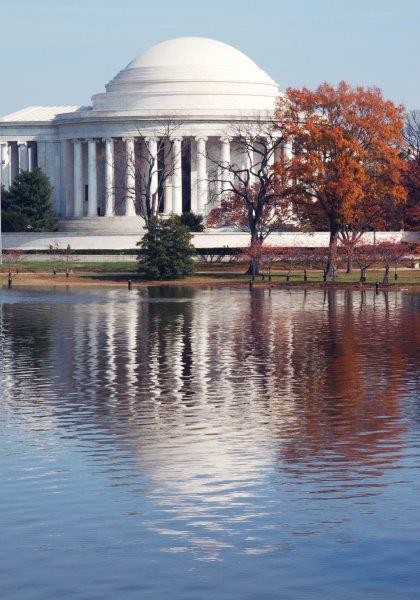 The monument honours this extraordinary man. It’s built in classical style Thomas Jefferson liked. The monument stands on the National Mall’s Tidal Basin in Washington, D.C., and reflects on the water. There are cherry trees around, so it’s beautiful when they’re in bloom. There’s a bronze statue of Jefferson inside, looking towards the White House. On the walls, there are parts of Jefferson’s texts including the Declaration of Independence.

President Roosevelt dedicated the memorial on 13 April 1943, the 200th anniversary of Jefferson’s birthday. He called it a ‚shrine of freedom‘.