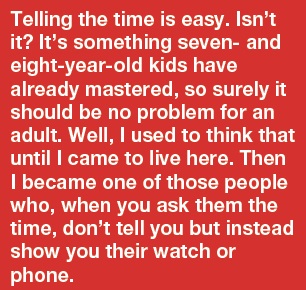 The first thing I had to get used to was the twenty-four hour clock. It isn’t used much in the Anglophone world. It wasn’t a big problem, although I did get caught out sometimes when I wasn’t listening carefully enough. Did that nice girl say she would meet me at šest hodin or šestnáct hodin? And I experienced one or two embarrassing situations in Slovakia before I learned that, for example, pol druhej was not what we call ‘half two’ but ‘half one.’ What was genuinely difficult, though, was trying to understand what someone meant when they told me it was something like the unbelievably complicated Czech za pět minut třičtvrtě na sedmnáct, which really was just too much for me. It still is, to be honest.Let’s move on from the idea of time to the actual word ‘time,’ which appears in many places and with many different partners. TIME, founded in 1923, is a famous American news magazine, and some well-known newspapers feature the word in their titles too: The Times, published in London under that name since 1788, is the oldest. Others include The Irish Times, The Times of India, The New York Times, and Los Angeles Times. 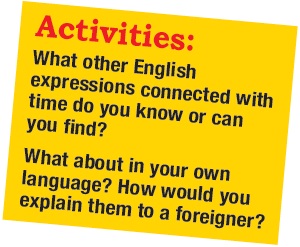 There are plenty of common phrases which include the word. If something happens ‘on time,’ for example a train arriving or leaving, it happens punctually1. Being ‘in time’ means not being late, whereas ‘in no time’ means immediately or almost immediately and ‘ahead of time’ means before the agreed time. Although the expression ‘short time,’ as in “We waited for a short time and then the test started,” does exist, it’s much less common than ‘long time,’ as in “I’ve known him for a long time.” If something happens ‘from time to time,’ it happens occasionally, but if it happens ‘time after time,’ it is repeated a lot (like the word ‘time’ in this paragraph!).
The phrase ‘have a good/bad time’ is very common, and numerous other words can substitute2 for ‘good’ or ‘bad’ in it (for example, fantastic, great, wonderful, brilliant, terrible, horrible, awful, dreadful, etc.). Another expression that you often hear is ‘to give somebody a hard time,’ meaning to be critical or unpleasant to them in some other way. And if you want people to do something, phrases such as “It’s time to … (go home, walk the dog, do your homework)” or “It’s time (or high time) you … (stopped daydreaming, got up, tidied your bedroom, etc.)” are useful.
The expression ‘time is money’ is a well-known one. Interestingly, several of the verbs that go together with ‘time’ in English are also often found together with ‘money’. You can save, spend, or waste time, you can buy time or invest it in something, and you can have free time. Finally, and perhaps a little confusingly given that robiť/dělat mean both ‘make’ and ‘do’, ‘making time’ (“I could make some time to see you later today”) is very different from ‘doing time’, which means to be in prison. I would love to spend more time with you, but I must go – my time is up! .