When I was a ‘little tacker1,’ just over four years old, I visited Ayers Rock. It has a deep orange glow2 to it, with temperatures rising to forty degrees Celsius regularly. It truly is in the middle of nowhere, and the red iron dust can be seen for miles around the monolith. Although it looks bigger in photos, it’s only 348 metres high and 863 metres wide. It is the world’s largest monolith. It changes to a bright red colour at sunset and at dawn3.

Uluru is sacred to the Aboriginal people living in the area, including the Pitjantjatjara and Anangu. When I was there, a local Aboriginal showed us Uluru and told us many dreamtime stories it has inspired. He was extremely hard to understand; a true Aboriginal has a strong accent, quite unlike a regular Australian accent.

He gave us, and I reluctantly4 tasted what is called a ‘Witchetty grub5,’ which is the larva of a moth. It has amazingly high protein content, but the first time I ate it was a struggle to 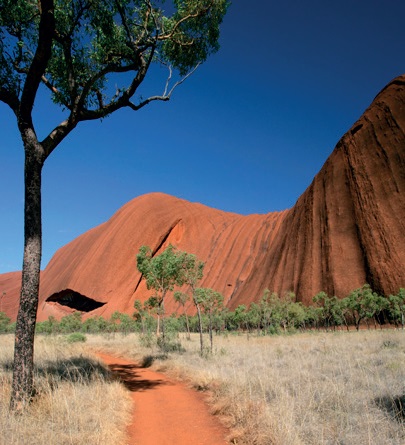 say the least. It tastes similar to chicken.

Uluru also has a multitude of caves around its base, with many cave paintings and drawings made by the Aboriginales over thousands of years. In the caves there were also local bats and a wide selection of reptiles6. Outside it, there is a wide diversity of flora and fauna, such as the Blankflanked Rock-Wallaby7. The major difference betweeen rock-wallabies and kangaroos is their size and habitat; otherwise, they are the same.

What surprises me is that Uluru used to sit at the bottom of the sea and was created over 600 million years. Today, 2.5 kilometres of it is still underground.

It’s a serene8, calming and beautiful place, and the stories, food and amazing wildlife bring it all to life. If you ever get a chance to go there, make sure you immerse yourself9 in Aboriginal culture – it’s rich and remarkable.