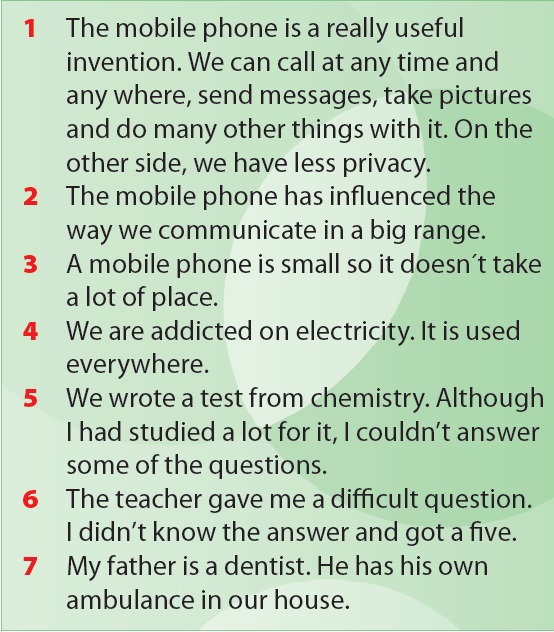 o introduce opposite points of some ideas or opinions. We can leave out the word ‘hand’ if we use both the phrases, like in this example: On the one hand, I’d like to have my own children, but on the other (hand), I don’t want to give up my freedom.

The noun range has several different meanings. Here are some examples of its use: The hotel offers a wide range of facilities. It’s not easy to find a house in our price range. The gun has a range of 10 kilometres. However, when we want to express how large, important, serious, etc., something is, we should use the structure to…extent (to a great/large/certain/some, etc. extent). So, our correct example sentence should read like this: The mobile phone has influenced the way we communicate to a large extent.

There are two mistakes in the sentence. The nouns place and space seem similar to us, but they are not interchangeable. place = a particular point, building, area, town, city, etc.
This is the place where I first met my wife. space (also room) = an amount of a place that is empty.
There’s plenty of space/room for everybody. Secondly, the verb is incomplete in the original sentence. Something or somebody takes up some space/room. One more thing which is not a mistake but a matter of preference – when using negatives, native speakers prefer to use much/many to a lot of, e.g., ‘I don’t have much time to talk to you. I’m terribly busy,’ or ‘I don’t know many people here, but I have a few close friends.’
So finally, here is the correct and possibly a more natural sentence: A mobile phone is small so it doesn’t take up much space.

You can do/sit (for)/take a test/an exam; the verb ‘write’ is used before a test/an exam in our languages, but not normally in English. The preposition ‘from’ is also incorrect here. We use in before the school subjects examined, as in ‘a test/exam in maths/biology/history’, etc. Alternatively, we can simply say/write ‘a maths/biology/ history test.’ All in all, the original sentence should have read as follows: ‘We took a test in chemistry,’ or ‘We took a chemistry test.’ One more thing – we use the preposition on when we want to specify the topic tested, as in ‘a test on the Second World War’, or ‘an exam on chemical compounds’.

This is again a typical example of an incorrect word-for-word translation of a certain phrase. You can ‘ask somebody a question’ or, more formally, ‘address/put a question to somebody’. You don’t normally ‘give somebody a question’ in English. That’s why the correct sentence should be: The teacher asked me a diffi cult question.

As far as I know, an ambulance is a vehicle used for taking ill or injured people to a hospital. I suppose dentists don’t normally need/use an ambulance, do they? So the student’s father more probably has his own surgery (BrE) / office (AmE) in their house.