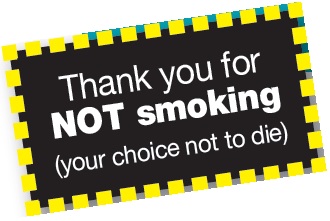 BEFORE READING:: What do you imagine from when you hear “World No Tobacco Day”? How do you feel about smoking (or using tobacco products)? What do you think is the reason people smoke?

Have you ever read this sentence on a pack of cigarettes, “smoking may cause cancer”?
If you think about it, it’s true, but it’s also a lie. It’s kind of like saying, “Jumping off a ten-story building may kill you”. Sure, there is a possibility you’ll live (about 10% chance). People don’t go jumping off buildings to see if they’ll survive though. Smoking causes cancer. When I read something like this, I often wonder how much the cigarette companies paid for the word “may”.
If you smoke, or if you don’t, you know there are health risks. Although you might not think about it while smoking, it affects your health and those around you.
That’s why the World Health Organization (WHO) created World No Tobacco Day (WNTD). It’s exactly what it sounds like. It is one day (May 31st) around the world where nobody uses tobacco in any form. (at least that’s the idea.) This is a great day for some, and others hate it. It’s easy to understand why.
If a friend or family member smokes, you know he is killing himself by smoking. You care; you want him to stop. Because of that, you feel sad when he 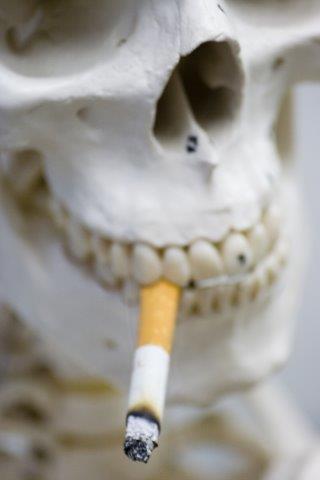 smokes – a day like WNTD helps. It raises awareness of1 the health problems using tobacco brings. Close to 900,000 people a year die, not because they smoke, but because they breathe in the smoke of other people. They live, or work with smokers and die because of it. They don’t even want to use tobacco, but they still die. The other 6.1 million deaths are directly because of tobacco use. WNTD is a step in stopping tobacco abuse.
Of course, not everybody thinks using tobacco is a problem. Tobacco farmers, cigarette companies, and smokers don’t like WNTD. They want more people to smoke and use tobacco. They feel like WNTD hurts the economy, businesses and their personal freedom. (Ironically, one of the largest cigarette companies in the world supports this WNTD.) That’s not where it stops.
Watch out! There is a new kind of cigarette in town -the electronic cigarette. Some like to say it’s “healthier”, because of water vapor2, or something else. It’s not healthier. In fact, it’s probably more dangerous. Why? Because now smoking doesn’t feel so harsh3, and even has sweet flavors. What this means is, kids and the youth want to smoke them. It feels better and doesn’t smell bad. The largest e-cigarette company in the USA has made an e-cigarette that allows people to smoke even more nicotine than normal cigarettes. (It’s the nicotine in tobacco that’s harmful to your health. It’s also what gets people addicted to cigarettes). To make it even worse, now you can see advertisements of e-cigarettes with younger people and celebrities, directly targeted towards the youth.
Hopefully you’re not a smoker. If you’re not, then please get more information about what’s happening today. Learn about e-cigarettes, and other developments taking place nowadays. Help those around you stay aware. If you do smoke, then you probably want to stop. (I don’t see why you’d be reading this otherwise.) Ask yourself why you smoke. If it’s because of friends, then maybe you can find a different way of relaxing together. If it’s because of stress – try to find another way to release the built-up tension. As May 31st comes, start preparing. Be one of those that support WNTD.

After reading activities
Plan for May 31st to be a (extra) healthy day.
Not only won’t you use tobacco but you can also think about eating healthy food and exercising.
What helps a person stop smoking / using tobacco? Instead of having friends where you smoke together, imagine creating a different kind of group.
Why would a huge tobacco company support WNTD?